For April we’re reading مالك الحزين، إبراهيم أصلان / The Heron by Egyptian author Ibrahim Aslan, which is #41 on the Arab Writers Union’s list of the best 105 Arabic novels of the 20th century. It was translated by Elliott Colla.

A brief summary of the book from AUC Press:
“A novel set against the Cairo ‘bread riots’ of 1977. One long winter night and the Cairo neighborhood of Kit Kat stands at a crossroads. Poised like herons fishing on the banks of the Nile, the characters of this novel wait and watch as opportunities swim by past their reach. Some gaze on as their local café is stolen before their eyes. One studies how the nouveaux riches of the Open Door Policy make their money, while others try their own hand at swindle. Still others read the empty rhetoric of state-run newspapers and wonder what it all means. It is long past midnight; some walk, some sit and smoke, and all are trading stories. A young artist waits by himself for a girl, a drink, or a revolution. All are waiting for what the next day might bring. Set on the eve of the January 1977 “bread riots” against IMF austerity programs and privatization that nearly brought down President Anwar Sadat, The Heron catches Egypt in the mid-stream of its modern history.” 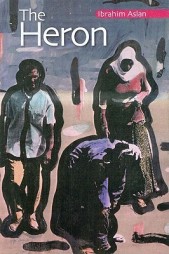 Here is a review of the book in Banipal and an interview with Ibrahim Aslan in Al-Ahram Weekly from May 2010.

The book has also been adapted as a film, الكيت كات / Kit Kat, which is available online here.

This entry was posted in Elliott Colla, Ibrahim Aslan and tagged Egypt, Top105. Bookmark the permalink.